Find Out Which Type of Motorcycle Engine is Right for You? 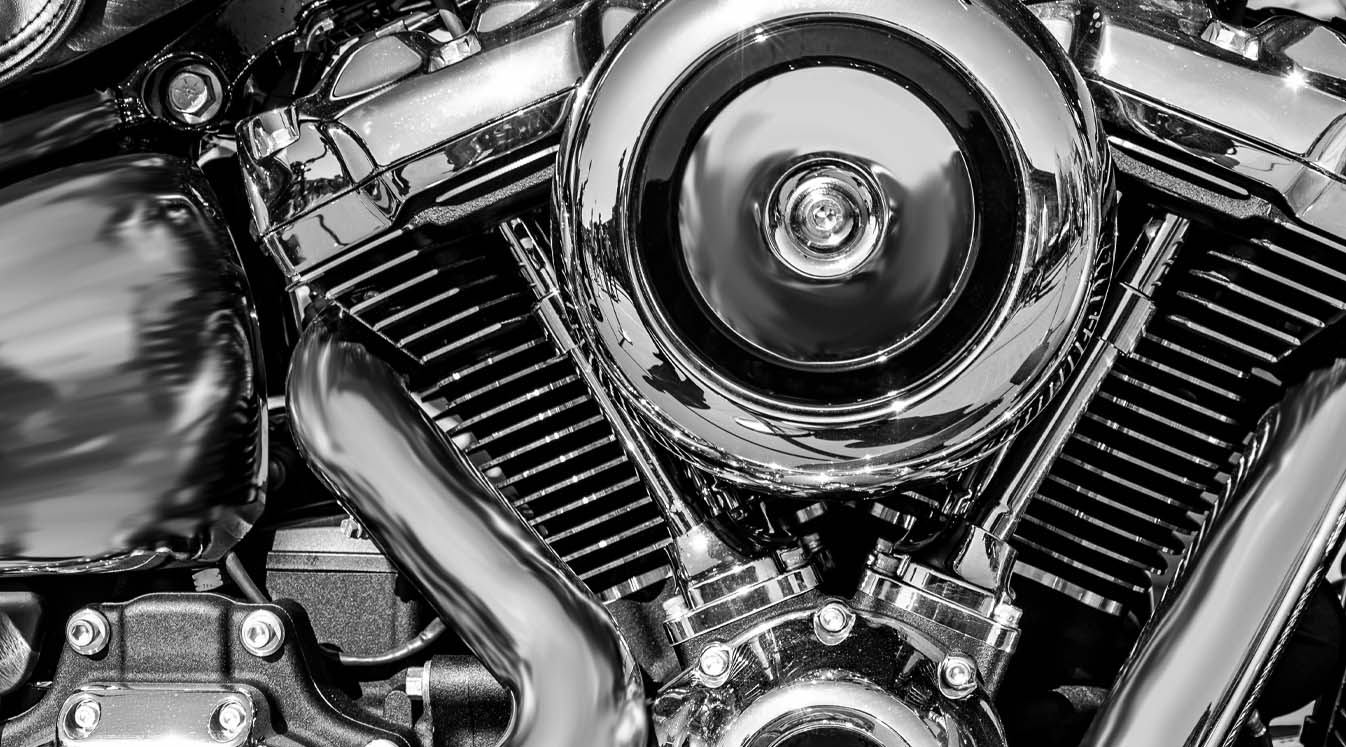 Most motorcycle engines fall into one of these categories:

Just as the name implies, this type of engine uses only one cylinder. It may be in a vertical, horizontal, or slanted position. The cylinder powers the engine, so the more cylinders the engine has, the more powerful it will be. This is where the fuel is burned into mechanical energy, which powers your motorcycle. Every cylinder comes with a piston, which compresses the air and fuel.

Engines with one cylinder tend to be relatively inexpensive and the easiest to maintain. They come with simple designs that make them easy to clean and replace. However, this means the engine only comes with one piston. It will have to work hard to keep your engine running, so it may need to be replaced or repaired from time to time. Having just one cylinder also reduces the weight of the engine, which keeps your bike as light as possible.

Learn More About Engine CCs and What They Mean Here 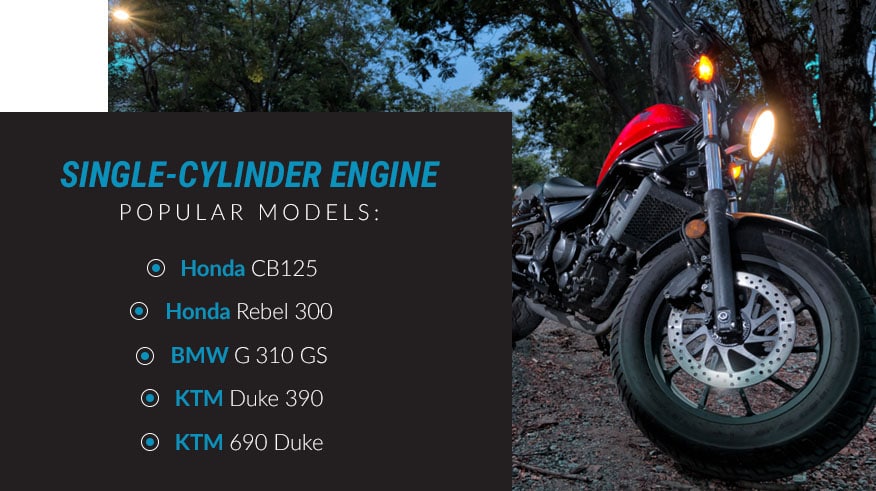 The single cylinder Honda Super Cub is currently the world’s best-selling motorcycle. It’s easy to use and maintain, giving it widespread appeal.

A parallel twin engine comes with two cylinders, which are attached to the same cylinder block. This means they typically work side-by-side. They are laid vertically or horizontally in the engine, but occasionally they will be placed behind one another.

Parallel twins are smaller than other types of two-cylinder engines. This style tends to be common among dirt bikes, sport bikes, and commuter motorcycles. They are considered a step up from single-cylinder engines in terms of power and stability, but they still suffer from excess vibrations at high speeds.

Like their single-cylinder counterparts, they are relatively inexpensive to produce and easy to maintain. Having an extra cylinder usually increases the size of the engine. You can find motorcycles that go all the way up to 1,000cc.

Use Bluetooth Motorcycle Speakers to Keep in Touch on the Road

This design means the two cylinders are placed at an angle from each other, forming a “V” or “L” shape. Unlike parallel twins, each cylinder is placed in a separate cylinder block, which increases the size and power of the engine. The size and placement of the cylinders varies from model to model. Some cylinders may be at a 45-degree angle, while others may be at a 90-degree angle, thus the name “L-Twin”. The term “V-Twin Trans” means the cylinders are parallel to the bike’s frame, which keeps things compact.

The cylinders are usually narrow and long to keep things leans. They come with a unique exhaust sound and provide exceptional torque.

These bikes tend to be more powerful and stable than parallel-twins without adding too much extra weight or making the bike difficult to maintain. The V-Twin style is the most widely used in the industry, giving you the best of both worlds. 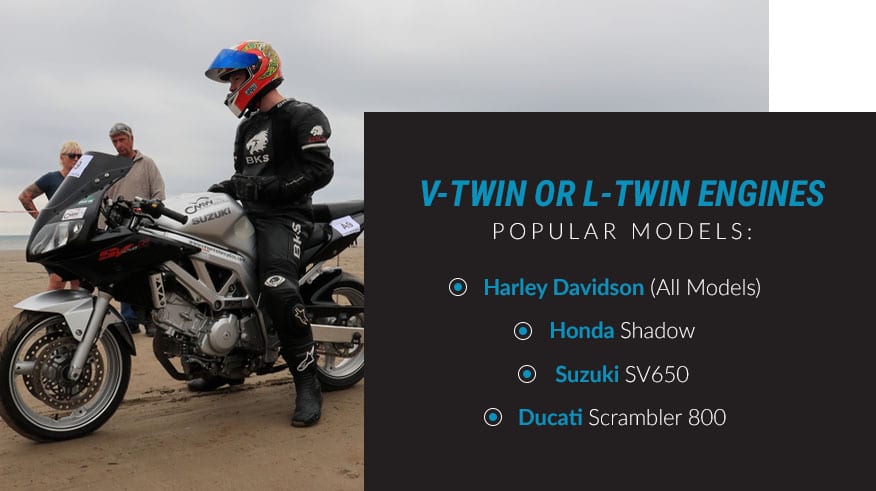 Inline engines come with four or six cylinders, depending on the make and model. They are typically housed in a single cylinder block. The cylinders lay transversally to keep things compact, but the extra cylinders increase the width of the engine. Inline-six engines are more powerful than inline-four engines, but there’s a trade-off.

These bikes offer more power and stability than smaller engines with few vibrations even at high speeds, but they are significantly heavier and more expensive to maintain. They also tend to consume a lot of fuel without providing a lot of torque. This design tends to be popular among high-performance bikes, including those from Japanese manufacturers.

A V4 engine basically combines two V-Twins and stacks them on top of each other. They contain four cylinders, all of which are placed at an angle. This requires additional space, which makes the bike heavier and harder to maintain. However, they offer just as much, if not more, power than Inline-Four engines. The engine isn’t as wide as the Inline-Four, which makes the engine more compact. Expect a smooth ride with few vibrations. 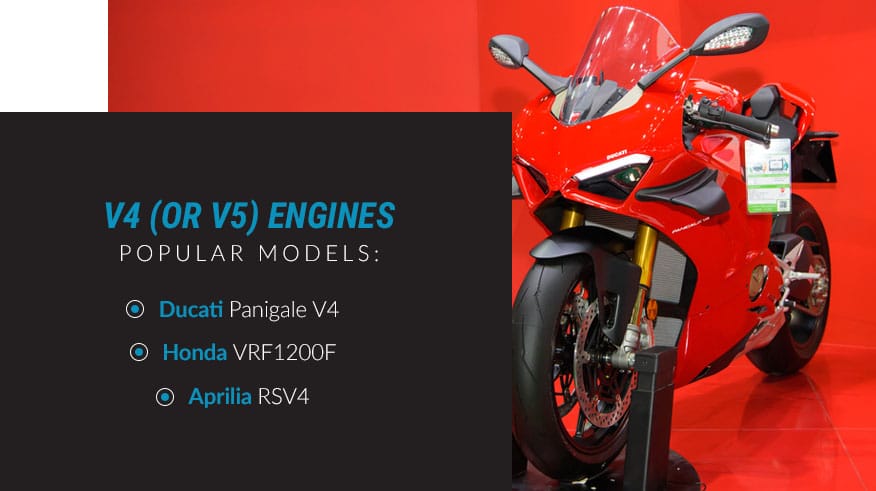 The Flat-Twin, also known as a Boxer engine, is a rare engine layout that features two, four, or six cylinders placed in a horizontal position on either side of the crankshaft. Again, the more cylinders, the more powerful the engine.

This design provides a lower center of gravity with better cooling potential. Considering how rare these designs tend to be, you might have trouble repairing and replacing the cylinders and pistons over time.

Rotary engines, also known as Wankels, use rotors instead of pistons to compress the air and fuel. This creates a turning motion. This design remains exceedingly rare in the industry, but some manufacturers are trying to bring it back. They tend to be smooth and quiet with fewer moving parts, which makes them easy to maintain. They also come with more rotations per minute (RPM) compared to regular pistons, which creates additional power.

However, rotary engines tend to be gas guzzlers, so be ready to pay more at the pump. They also require regular maintenance and repairs. 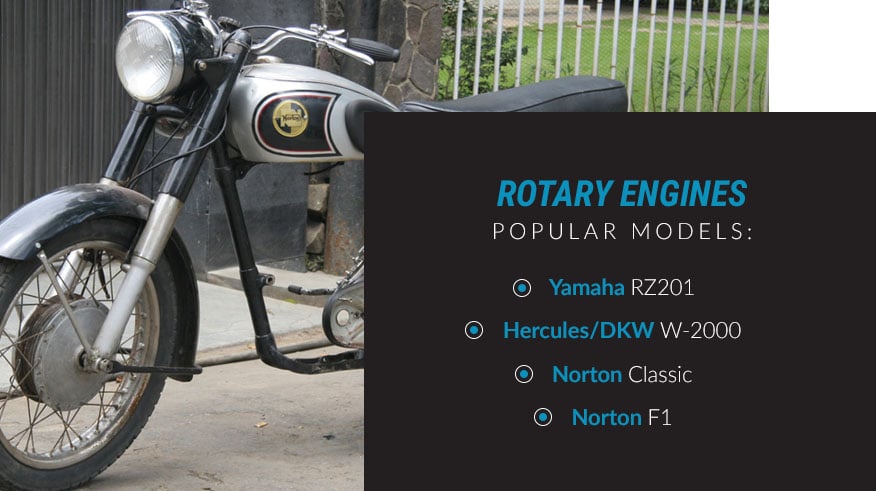 The motorcycle industry is slowly going electric. Thanks to renewable energy, electric engines tend to be better for the environment. They don’t run on fossil fuels, which reduces carbon emissions that contribute to climate change. There are no cylinders, pistons or rotaries compressing air and fuel. It’s just like charging your phone, laptop, or any other electronic device.

Many consumers have started looking for electric bikes, especially those that live in urban areas with regular access to inexpensive electricity. These bikes promise just as much power as regular engines, but they take a while to recharge. Maintaining these engines can be a challenge if your local mechanic isn’t equipped to work with this technology. They also tend to be a little more expensive than regular motorcycles, but you won’t have to spend nearly as much on fuel, especially if you generate your own electricity at home using solar panels.

You’ll also have to decide between a two-stroke and four-stroke engine, the latter has becoming increasingly popular over the last few years. That’s because four-stroke engines tend to last longer and are easier to maintain than two-stroke engines. They are more fuel efficient and don’t consume oil. You don’t have mix your oil with the gas, which makes for a cleaner engine.

Most models contain four-stroke engines. They tend to be the norm when it comes to street bikes and commuter motorcycles. However, some dirt bikes and racing models still come with two strokes.

Capacity and engine power can vary widely based on the type of engine. This measures the dimensions of the cylinder. The more capacity, the more powerful your bike will be. However, this adds extra weight, which leads to additional maintenance costs. The higher the cc, the higher displacement. 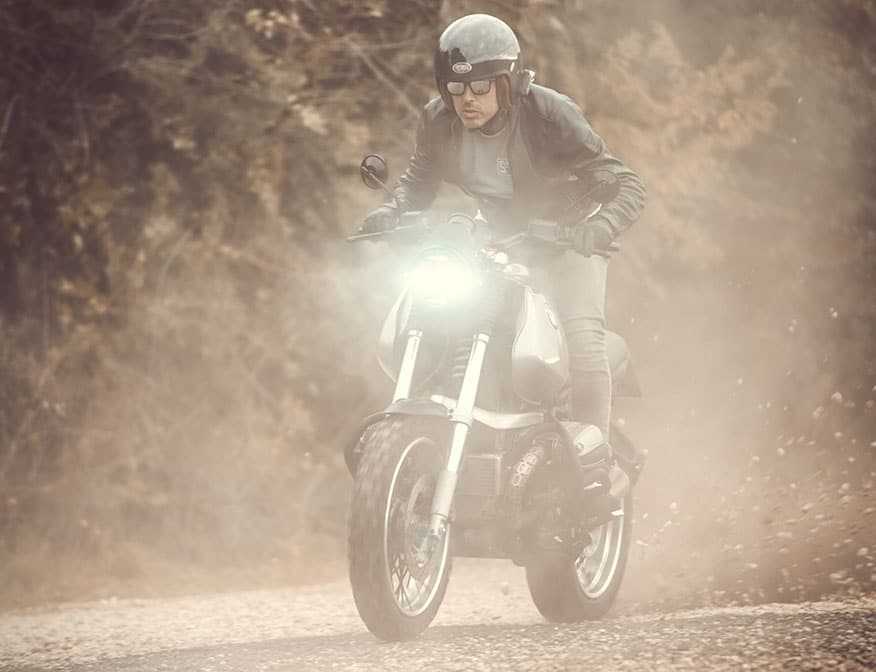 Engines can also be categorized by their cooling system, either liquid- or air-cooled. Every engine needs to cool off, so it doesn’t overheat. Air-cooled systems let air in to cool off the engine, while liquid-cooled systems use oil or water to transfer the heat away from the engine and back toward the radiator, just like the average car. The radiator then cools off the fluid before returning it to the engine.

Liquid cooling systems tend to be the most efficient. They produce lower operating temperatures, so your engine can produce more power without overheating.

These classifications should help you make an informed decision when choosing a motorcycle or engine type. Keep in mind that every bike is different. Compare the related specifications to find the right style of bike for your unique lifestyle. 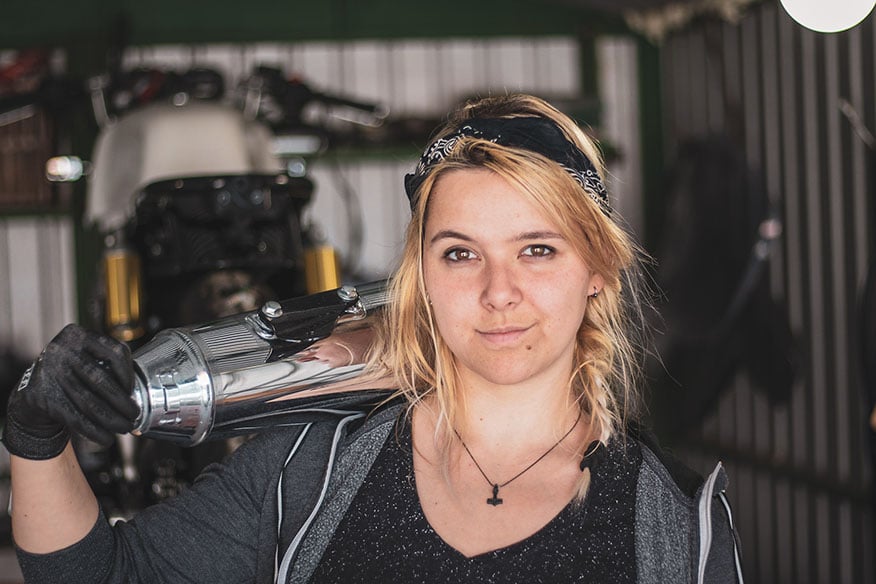 If you’re a stickler for power and torque, consider going with a six-cylinder engine. The boxer engines tend to provide the most stability for a smoother ride. This is the ideal choice when it comes to going off-road and taking long road trips. Read reviews of different makes and models online to get a better sense of how the bike will serve you on the road.

With so many makes and models to choose from, you should be able to find the right balance between power, performance, and handling.