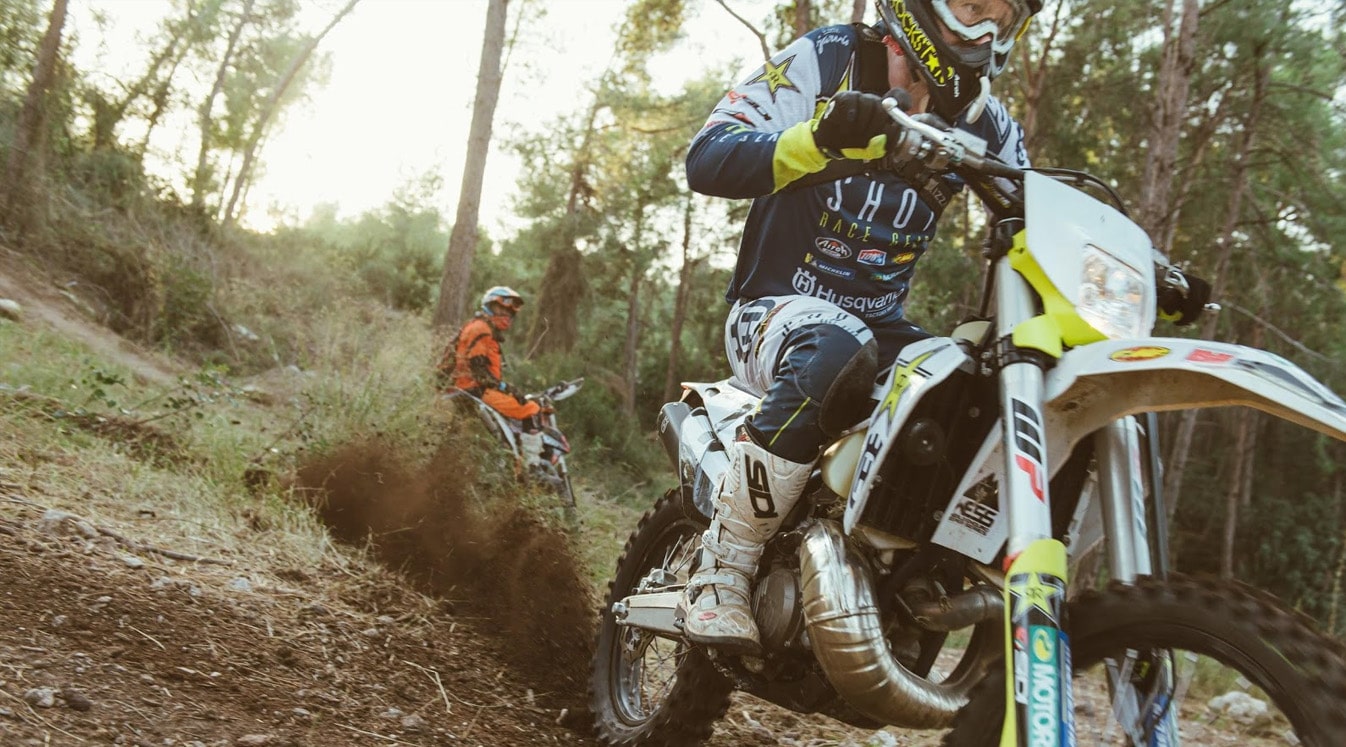 Like most hobbies, you need to develop some skills on a dirt bike in order to have fun and be safe. The learning curve can seem steep initially, but the basics are actually easy enough to master, and you’ll be in for an awesome ride once you’ve got it down.

Learning to ride a dirt bike is best done with an experienced friend or instructor who can show you how to handle the bike, but you can still get a good idea of the basics by reading up on dirt bike fundamentals. In this guide, we’ll show you the key tips to get started riding a dirt bike.

Like any other powersports vehicle, a helmet is a must for riding a dirt bike. Off-road helmets are specifically designed for powersports riding on rough terrain with vehicles like dirt bikes These helmet styles all include a chin guard to prevent face injuries. Make sure to look for a U.S. DOT-approved helmet or a SNELL-approved model for even better protection.

Eye protection is also important. Branches, dust and wind all pose as eye hazards. Many off-road helmets don’t come with the built-in eye protection that other styles of helmets have, so make sure to invest in a pair of riding goggles if yours don’t have eye protection.

A helmet and eye protection are the bare minimum of protective gear you should have when riding a dirt bike. A fully protected dirt bike rider will also have full body armor, knee protectors and boots. You might think that you need less protection if you’re just riding trails rather than doing jumps on a dirt track, but you’re still risking serious injury by going out underdressed. An “all the gear, all the time” attitude reduces your risk and helps preserve your health so you can keep riding and having fun.

Finally, if you’re riding with a group, take along some dirt bike helmet communicators. Clear communication helps keep everybody safe during a ride, like warning each other about potential dangers and unexpected events. Mesh technology communicators like the Cardo PACKTALK BOLD and Cardo PACKTALK SLIM give your group a crystal-clear signal at ranges up to a mile. A set of Bluetooth helmet speakers is an awesome addition for immersing yourself in your favorite music while you’re on the trail or the track.

So, how do you turn these things on, anyway? First, familiarize yourself with the layout of the clutch and shifters on your dirt bike. Dirt bikes made for adults have a clutch on the left handlebar and a foot shifter just in front of the left foot peg. The throttle, which gives your bike gas, is on the right handle and the kickstart is on the right side tucked next to the gas tank.

You can start most dirt bikes by following these steps:

Next, it’s time to learn a little bit about shifting gears on a dirt bike. Find an open space with no obstacles where you can practice as shifting gears can be a little challenging to new riders.

After that, you’ll shift by placing your foot under the shifter and bringing it up—half a click for neutral and then another click for second, third, fourth and fifth gears.

Once you’re in first, you won’t want to stay there for long. Notice if the engine seems to be struggling and learn the sounds it makes for when you need to shift gears. An experienced rider can help you identify the point where your bike needs to shift.

The process for shifting while in motion is simple in theory—just pull the clutch in quickly and then hook your foot under the shift lever and pull it up to the next gear. Let go of the clutch, and voila! You’re now in the next gear up. The challenge of shifting comes from coordinating your throttle and clutch to upshift gears smoothly, giving the bike a little bit of gas as you shift. Give it too much and your bike will run away from you. Give it too little and you’ll stall the engine.

Gear shifting on a dirt bike follows the same basic principles as it does on any other vehicle. Lower gears are good for lower speeds and climbing hills while higher gears are better for sustained speed.. Unlike manual transmission cars, dirt bikes can actually handle this, but it’s definitely better for your bike to use the clutch.

Note that shifting into neutral can be a little tricky for beginners as neutral is positioned halfway between first and second gear on the shifter. It’s important to take a little time to practice finding it on the shifter.

Keep in mind that you’ll have to vary your braking technique according to the terrain. Bumpy terrain often requires more gentle braking while smoother terrain needs more braking power. Remember that sandy or muddy conditions are tougher to brake in. Try out riding on a variety of terrain styles and pay attention to how your brakes respond to each one.

Take it slow when you’re learning to ride a dirt bike. You won’t gain anything by rushing into rides you aren’t ready for, so spend as long as you need to learn the basics and practice on easy terrain.

One great way to make your first few rides better and safer is to take a class from the Motorcycle Safety Foundation (MSF). The MSF is a nonprofit that offers the gold standard of powersports safety courses, and their one-day MSF Dirt Bike School programs offer a fun way to learn the basics from a professional instructor. The course is also available for kids as young as six-years-old, making it easy for young riders to get started with proper technique and safety.

Of course, there’s only so much you can learn without actually jumping on a dirt bike yourself. So once you know the basics of dirt biking, get out there and have fun! You’ll probably pick it up faster than you expect, and you’ll also find a fun and exciting powersports hobby.