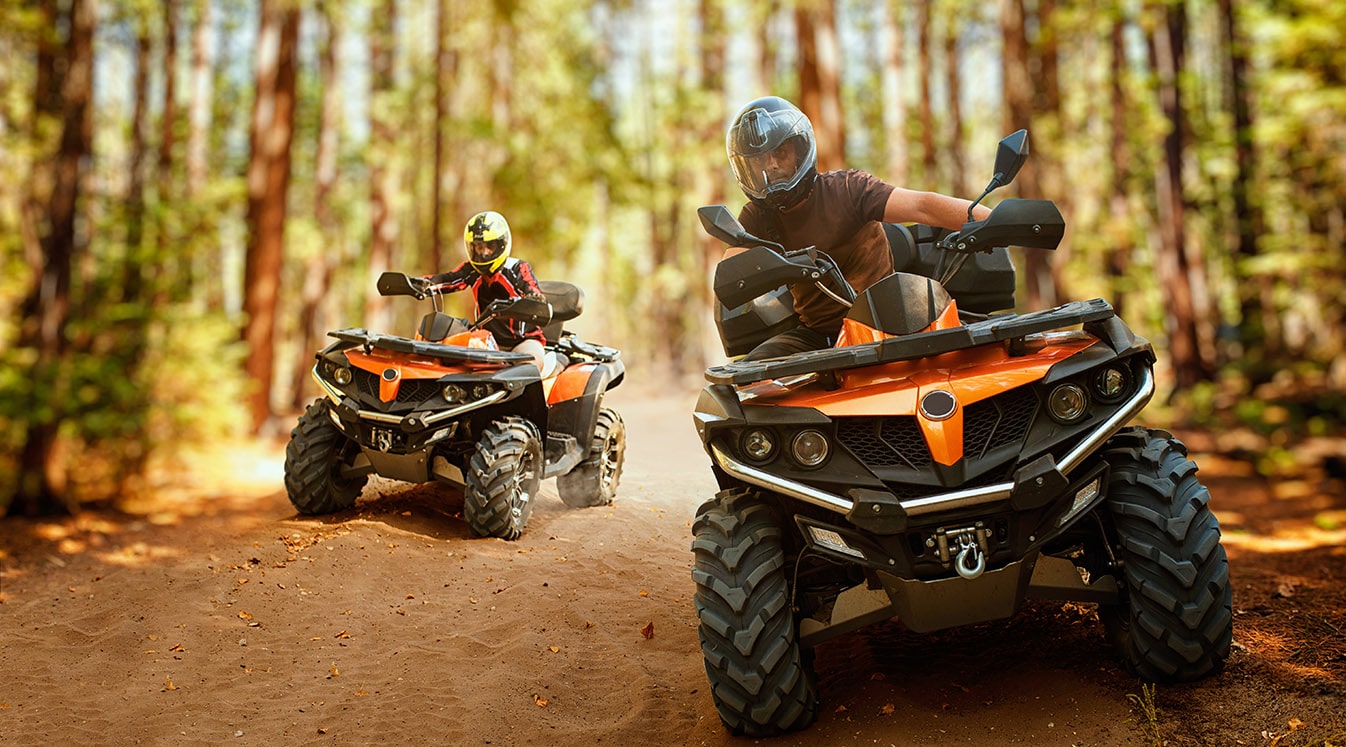 Let’s start with the most used term. ATV stands for all terrain vehicle. As the name implies, it can be used to describe any vehicle that’s capable of driving over different kinds of terrain, including mud, sand, snow, and rocks. This includes some quads and 4-wheelers, but we’ll get to those in a second.

By definition, all ATVs have at least three wheels, so we’re not talking about motorcycles or bikes here. They have large, all-terrain tires that can drive over different types of surfaces without getting stuck.

The term applies to everything from off-road 3-wheelers to heavy-duty jeeps and even military vehicles with six wheels or more. UTVs, which stands for utility terrain vehicles, also fall into this category.

The term was first coined in the 1970s when Honda created all-terrain vehicles with three wheels. This was the first ATV as we know them today. The idea soon went mainstream with the invention of the quad, or the first recreational all-terrain vehicle, in the early 1980s. Three-wheeled ATVs were first popular until they were discontinued in 1987 due to safety issues.

However, ATVs date all the way back to WWI when tanks and other machines were used to traverse the front lines, they just didn’t refer to them as ATVs.

Most ATVs have four wheels, so quads and 4-wheelers often get lumped into this category, but not all ATVs are quads and they don’t all have four wheels. Think of ATV as an umbrella description for all off-road vehicles.

Quads are defined as recreational ATVs, or the “fun” ATVs. The term includes anything all-terrain vehicle with four wheels used for non-business purposes. Auto manufacturers started making bikes specifically for consumers in the early 1980s. The word was first invented by Suzuki in 1982.

ATVs with three wheels were slowly dying in popularity due to poor handling and stability. Have one less wheel made the vehicle difficult to control in off-road settings. Quads soon became the norm. These bikes were mostly used for racing, tricks, and exploring the wilderness. The quality improved over the years as the hobby went mainstream.

Honda and Kawasaki soon came out with their own versions of the quad. Superior suspension systems made quads safer to use but there were still some safety issues.

Yamaha made strides in 1985 when it released the Banshee, capable of driving through sand. “The King of the Dunes” was widely popular until the company discontinued production in 2006 due to environmental regulations.

As auto manufacturers looked for ways to increase the safety of these vehicles, they eventually added four-wheel drive to quads, and thus the 4-wheeler was born. Honda created the first 4-wheeler in 1986 with the release of the Honda Four Trax system. The 4×4 system rose in popularity as more consumers took an interest in motocross and off-roading, especially young adults.

Four-wheel drive is essential when navigating the outdoors. Drivers should have control of all four tires when trudging through the ice, snow, mud, and rocky landscapes. That’s why 4-wheelers have since become the norm in the off-roading industry.

For the sake of semantics, all 4-wheelers are quads but not all quads are 4-wheelers, as some quads don’t have four-wheel drive.

There you have it. You should now be able to differentiate between ATVs, quads, and 4-wheelers. Now the question is which one is right for you?

Choosing Between an ATV vs Quad vs 4-Wheeler

If you’re in the market to buy an off-road vehicle, you’ll have to choose between these different types of vehicles. Choosing the right type or style all depends on your budget and how you’re looking to use the vehicle. As we said before, some people tend to confuse these terms or use them interchangeably, so don’t assume the vehicle has four-wheel drive based on the name alone.

When explore the outdoors, it’s always best to have four-wheel drive, so we recommend going with a 4-wheeler. Double-check to make sure the bike has all-wheel drive. The tires should have a thick tread for pushing away debris. When buying used, you may need to get the shocks or brakes replaced before hitting the trail.

Don’t be scared away by the word ATV, as many ATVs come with four-wheel drive. The term quad isn’t used as much among off-roaders. If you search the word on the internet, you’ll get results about shapes and college dorms. Most quads have been discontinued, so if you see a listing, expect the bike to be used and at least over fifteen years old.

Now that you’re down to off-road vehicles with four-wheel drive, it’s time to learn about the different categories of vehicles, as not all ATVs/4-wheelers are created equal.

Most vehicles fall into one or more of the following categories:

Sport ATVs: These vehicles are normally used for racing. They have the horsepower, speed, and agility to win a race while navigating steep hills and turns. Sport ATVs tend to be leaner and lighter than other types of off-road vehicles. They are known for their suspension and quick handling, but they tend to spend most of their time on dirt roads, trails, and racing tracks.

Utility ATVs: These vehicles are designed for a specific purpose where safety is the first priority. They tend to have impeccable stability and suspension for a smooth ride. They’re common in the farming, wildlife management, utility, and search and rescue industries. Most utility ATVs are equipped to handle all kinds of terrain. Others may be designed to tackle snow or ice. They usually move at a slower pace than those designed for racing or sports. Some models come with built-in storage for equipment, first-aid kits, and other essentials.

Recreational ATVs: These vehicles run the gamut in terms of price and features. They can be used for everything from camping, exploring, and even just getting around town. On the low end, you can find a recreational ATV for around a $1,000 but it may not have four-wheel drive or the suspension you’d expect from an off-road vehicle. Others can go as high as several tens of thousands of dollars. These bikes will treat you well in virtually any situation.

Youth ATVs: Kids are getting in on the ATV action as well. Off-roading has surged in population among kids of all ages. Who didn’t want a dirt bike when they were growing up? These bikes are much cheaper, usually a few hundred dollars. They’re great for touring a national park or racing with friends, but they’re not built for long expeditions and exploring uninhabitable areas. 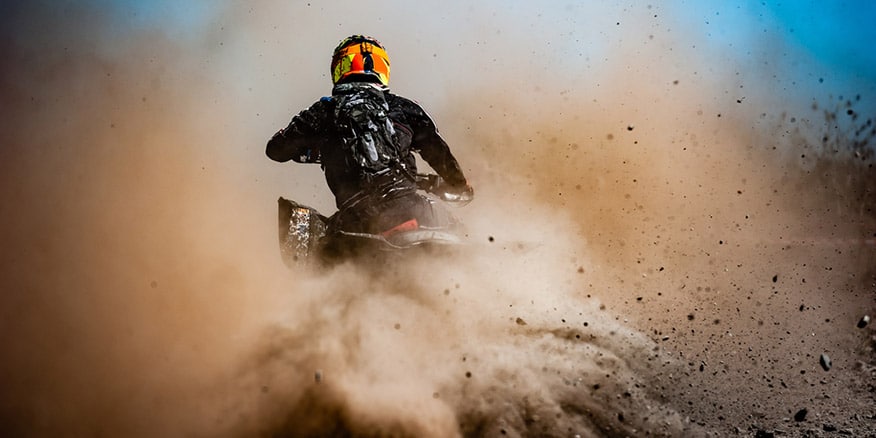 Consider how you plan on using the ATV before investing in a bike. You may not need all these features if you plan on driving near your home or mostly in the grass.

Don’t skimp on the price if you’re planning on trekking far from civilization. Nothing could be more important than your safety when traveling hundreds of miles from home, so make sure the bike can handle the trip without putting you or your companions at risk.

You might also want to consider adding a lift kit to your existing truck or jeep. This will give you room for bigger, thicker tires, so you can traverse all kinds of terrain without getting stuck. Riding in your truck will also give you more protection from the outdoors without limiting your experience. A two-inch lift and a new set of tires might be all you need to make your off-road dreams come true.

Once you buy an ATV or 4-wheeler, it’s time to start planning for your first expedition.

Use wireless Bluetooth motorcycle speakers to keep in touch with your companions or loved ones during the trip. You should be able to send and receive calls without taking your hands off the controls. This makes it easy to coordinate when traveling in a group. It’s easy to get turned around when exploring new areas, so be prepared to reach out if you get lost.

Find a wireless motorcycle Bluetooth headset that fits in your helmet when riding on your ATV. Some vehicles can be noisy, so look for a communication system that will stand out above the noise. Your equipment should also be waterproof in case things get messy.

Bring along a safety kit for treating injuries and illness on the road. Even the best suspension system may not prevent nausea and motion sickness. Use gauze and antibacterial cream to treat open wounds. A stray branch or tree can easy cut through your skin when you’re traveling at high speeds.

It’s also a good idea to bring along a winch or recovery system in case things take a turn for the worst. Mud, snow, water, and even sand can leave you trapped in the middle of nowhere. Attach a winch or recovery bands to a firm tree to get out of a sinking pit without calling for help.

If you think this is a lot of gear, you’re right. That’s why it’s important to find a bike with ample storage space. You won’t need as many supplies if you stay close to home. Be smart and consider the risks when packing for your trip.

As you start exploring the outdoors, your bike is bound to take a beating. Mud, snow, dirt, and other debris can do a number on the inner workings of your bike. It’s always best to wash off your bike at the end of a trip instead of leaving the mud out to dry. Excess moisture can lead to rust and electrical damage. Bring along a few maintenance essentials when taking a long trip.

Don’t leave your bike out in the cold. Try tor bring it inside as often as possible. You can also buy a cover to keep it out of the rain and snow.

Every bike is different. Some need regular maintenance more than others. Refer to your owner’s manual to make sure your bike stays in tip-top shape. Learn about the different types of motorcycles and ATVs to get a sense of how they work and what they need to work properly.

Off-roading isn’t going anywhere any time soon. Getting outdoors will always be important and investing in an ATV or 4-wheeler is one of the best ways to get closer to nature. Use your all-terrain bike to explore destinations that you never thought possible. Keep this information in mind as you start assembling everything you need to leave the road behind. Hopefully, you never confuse the terms ATV, quad, and 4-wheeler again. Ride safe and have fun!